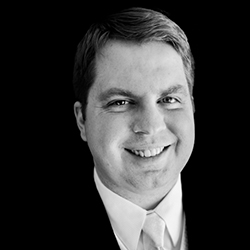 Dr. Daniel McDavitt (b. 1979) is associate professor of music and director of the Goucher College Choirs and Orchestra in Towson, Maryland, where he also directs the conducting and musicianship curriculum. Previous to this appointment, he was director of choral studies at Loyola University Maryland, and acting director of choirs at Knox College.

As a composer, Dr. McDavitt’s compositions and arrangements have been performed and broadcast throughout the United States and abroad. His music is published by Walton Music, ECS Publishing, Gentry Publications, and Jackman Music. He also has a number of self-published works available through this website. Dr. McDavitt has been awarded a commission from the Barlow Endowment for Music Composition, and won first prize in the Magnum Opus Composition Competition; he has also received numerous grants for music research and to promote new works by living composers; he regularly accepts commissions from community, university, and school choral ensembles from around the country. In 2017, he was honored with the Excellence in Teaching Award at Goucher College, and in 2018 and again in 2020, he has presented part of his research at the Oxford Conducting Institute at St. Anne's College at the University of Oxford.

Dr. McDavitt is a member of the American Choral Directors Association, and the National Collegiate Choral Organization, where he serves on the national board, as well as the College Music Society, and the American Society of Composers, Authors, and Publishers (ASCAP).

He lives in the Baltimore area with his wife, writer and photographer Jenika Beck McDavitt, and their two children.